How convenient single-lever mixers make working in the kitchen easier 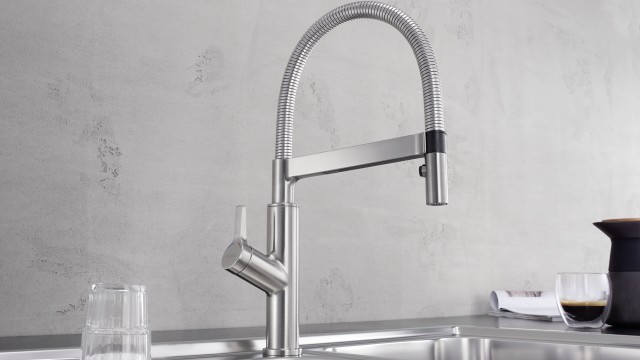 Single-lever mixers are an indispensable feature of modern kitchens, With one grasp, you can control both the water temperature and the flow. This is practical and saves you time and water. Experience the other advantages of single-lever mixer taps, what role the ceramic cartridge plays and how best to position the control lever.

Single-lever mixers are becoming increasingly popular. You can set both the water flow and the temperature using just one hand. This makes this mixer tap a cut above its traditional two-handle counterparts. And the easy control isn’t the only advantage.

Although the single-lever mixer was invented for kitchen use in the 1940s, it took several decades for it to really take off. In some countries, such as Ireland, the two-handle mixer tap is still found all over the place, with one rotary switch for hot water and another for cold. The user would get the water to the temperature and flow they wanted by turning the two rotary switches a little or a lot. This was laborious and took time. 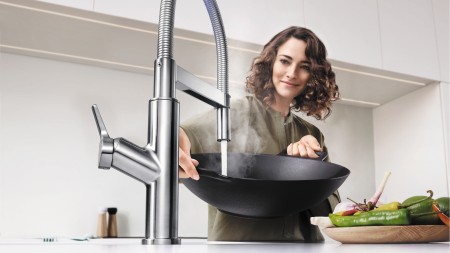 The single-lever mixer solves all of these problems in the kitchen. The temperature can be adjusted easily and variably using the mid-positioned lever, along the horizontal plane. Moving it vertically allows you to adjust the water pressure with ease. A side-positioned mixer tap works exactly the other way around. Last but not lease, you only need one hand to operate it! This is particularly practical is you are still holding crockery in your other hand. And if both hands are covered in food from preparing meals, it’s also easy to activate your single-lever mixer tap with your lower arm or the back of your hand. Modern sensor mixer taps like SOLENTA-S Senso go a step further, with contact-free operation. 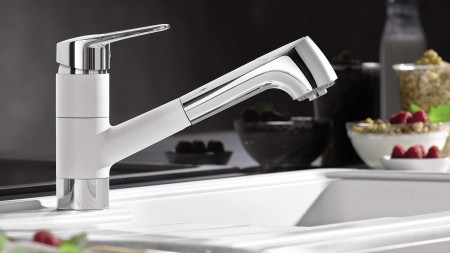 Scalding is a thing of the past

With the old mixer taps, getting the right water temperature often resulted in problems. It was difficult to gauge what effect turning the tap would have. In the worst case scenario, you might get mixed up yourself, resulting in boiling hot water gushing from the tap – especially dangerous for young children!
You are much less likely to make this mistake with a single-lever mixer tap. Here, the position of the lever serves as a visual indication of how hot the water coming out of the mixer tap is going to be. To avoid any unpleasant surprises, simply return the lever to the horizontal plane first, before raising it. There are also mixer taps that allow you to set a maximum temperature lock, e.g. for using in nurseries. One good example of this is the NOTIS model.

Single-lever mixers use much less water compared to two-handle mixer taps. As it takes less time to set the temperature, less unused water ends up flowing straight down the drain with a single-lever mixer tap. This is good news for the environment – and your water bill!

Last but not least: Single-lever mixers for kitchen use often come in a wide range of looks. As they are so widespread, there is a vast array of models, designs and styles. As such, you’ll be able to select the right single-lever mixer tap for almost any style of kitchen, whether it’s minimalistic, industrial style or farmhouse style. 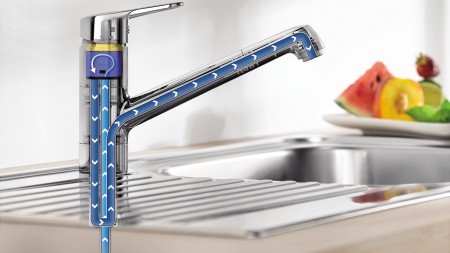 How the ceramic cartridge works

To ensure that single-lever mixer taps can make the most of the aforementioned advantages, they require one component above all others: the ceramic cartridge inside the mixer tap. This makes it possible to control the mixing ratio of cold and warm water using just a single lever.
The whole thing works like this: The ceramic cartridge consists of two ceramic discs, each with three holes: one for cold water, another for warm water, and the third for a mixed flow.

For optimum convenience in the kitchen, you should pay attention to the position of the lever when installing your single-lever mixer tap. The type of mixer tap and your personal preferences will play an important role in this. 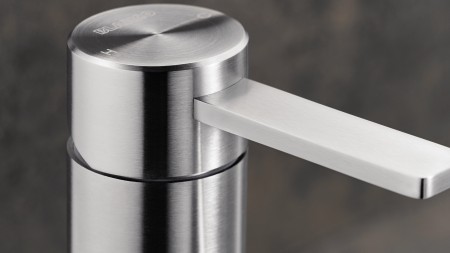 in the case of a single-hole mixer tap, the whole tap comes through only one whole in the worktop. This means that the control lever forms a combined unit with the outflow. Often, the lever lies in the middle above the tap, e.g. AMBIS. In this case, as the control lever is easy to reach from both sides, this mixer tap is a good solution for kitchens used by other left- and right-handers. 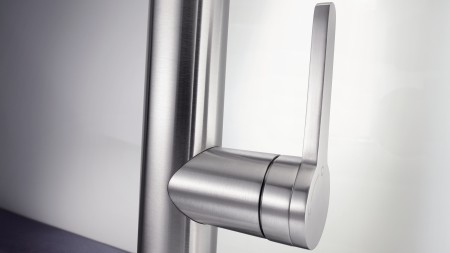 There are also single-hole mixer taps with the lever branching off from the mixer tap to the left or right, e.g. LINUS. These mixer taps are particularly suitable for households in which kitchen tasks are mainly carried out by the same person. For instance, left-handers could make kitchen tasks more comfortable by attaching the lever on ‘their’ side. 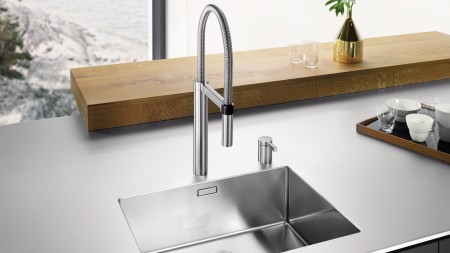 A two-hole mixer tap represents a great solution for those who appreciate flexible positioning. As the control lever comes out of the worktop through a second hole, separate from the tap, it can be mounted to the left or right of the tap itself, as in the case of BLANCOCULINA-S Duo. It is also possible to install the lever at the front of the sink – a useful option for users with reduced mobility, for instance. Last but not least, the two-hole version is also impressive for its striking, progressive design.

Before you decide whether to get a single-hole or two-hole mixer tap and opt for a particular control lever position, think about how you will use it. This way, you will be sure to enjoy your practical single-lever mixer tap for many years to come.

Find out about our range of models!

Do you want to enjoy the many advantages of modern single-lever mixer taps in your kitchen, with convenient control, lower water consumption and great design choice? Then find out now about high-quality mixer tap solutions from BLANCO!

Do you have any other questions about looking after your practical BLANCO single-lever mixer tap? Then please contact our friendly Customer Service team. We’re happy to help!